Ok so it’s nearly a week now since the North Channel was swum - this is a short wrap up of how the day, weather and ocean treated me and the emotional rollercoaster afterwards.


The Build Up - At first it was all systems go for Monday 4th August and I was running around like a headless chicken on Sunday night trying to get organised and sorted for a 1am start. At about 8pm though the boat man, Brian Maherg (@bangorboats), called it off due to newly forecasted gale force winds - that was that and I was to be contacted that Wednesday / Thursday to see if we might go ahead. As it got closer to Wednesday Brian contacted me again and gave the go ahead and for Thursday, with a reasonable swim start in Donaghadee at 7am. So this was it - all the training and preparation for 6 good months and now IT WAS ON! ﻿

Game Day - It all started at 3:30am with a big bowl of porridge, followed by a small bit of pasta which didn’t sit well. On the road with the team was AWESOME, Bridgeen (mummy bear), Alex (forever patient partner), Padraig (Brother + Mr “i’ve done this before”) and lastly, legend Keith Garry (training buddy and agony aunt) - ALL SYSTEMS WERE GO!!


Going up the road to Bangor (where we would meet the boat pilots) was nerve racking but the morning was spectacular - I couldn’t of hoped for anything more and the sunrise was epic. We unloaded the car, talked more sh%te and waited on the boat men to arrive. At 6 bells Brain Meharg (pilot) pulled up in Bangor with his co-pilot Mervin and we all bowl’d into the boat, our nerves clean wreaked. From here we drove to the starting point...Robbies Point in Donaghadee.
On our journey over everyone thankfully kept their distance and I had a wee bit of time (shitting myself) to give myself one last prep talk (as if i hadn’t got enough time on my own in the preceeding 10 hours ffs). When Brian shouted there was 10mins to start my heart dropped - mummy began to grease me up with vasoline – “lash it all on” says I, and showed mummy that it had to be put over the scars on my knees as the cold just zaps everything out of them (2 x knee reconstructions will do that to you). 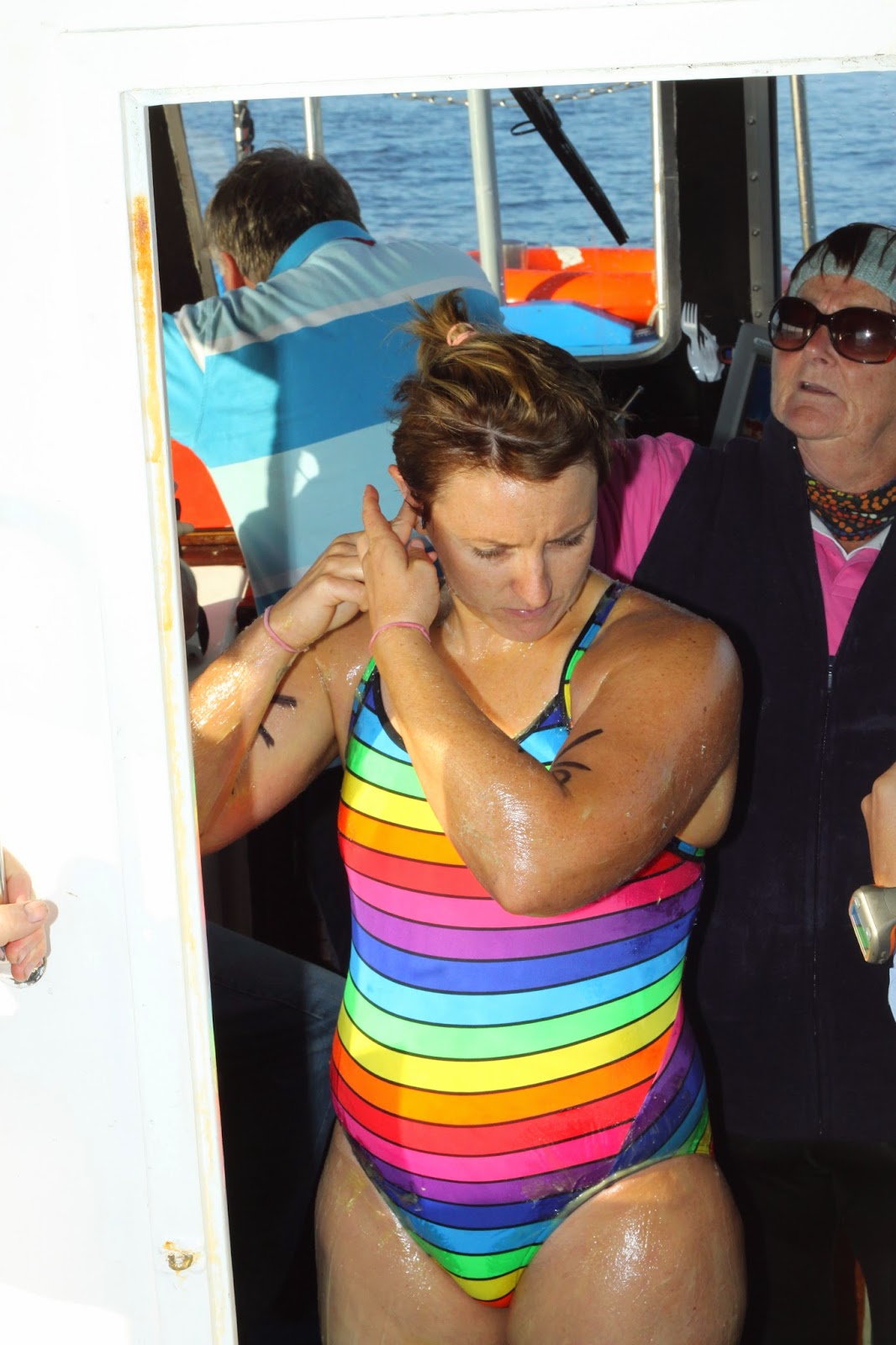 On my two arms in massive writing I had Alex write THANK (on right arm) and YOU (on left arm) - my biggest motivation tool being ‘GRATITUDE’ - for the ability to even dream about doing something like this and having the support, health and means - and being thankful not only for what was happening on that day, but also everything that has ever happened to me (good and bad) or will happen in the future.

"JUMP IN, SWIM TO IRISH LAND AND WE WILL BLOW THE HORN OF THE BOAT!" – said Brian the boatman – and from there, everything was moving in slow motion and my heart was going to bust with the pounding. I jumped into the water and “WOW”; there was a mixture of panic and relief – this is actually HAPPENING today and “FOOK” that’s cold!! I swum over to the Donaghadee shore to touch Irish land and before I knew it, with no time to fix my costume or pull it out of my ar&h, the horn went and....I WAS OFF!

No big panic, I tried to approach it nice and easy, find my rhythm – it was good water and weather conditions....all I had to do was swim. I had great trust in my crew that they had it all to get me to Scotland and I had the easy job... just swim!


Within the first hour there were 3 dolphins! (although they didn’t hang out for long and were just being nosy). I was feeding every 40mins after the 1st hour. The 1st hour flew by - everything was ace, I was in a great head space and the body was feeling good. I found myself going a nice comfortable pace, around Keith and my training pace of 1:30 – 1:31 per 100m. 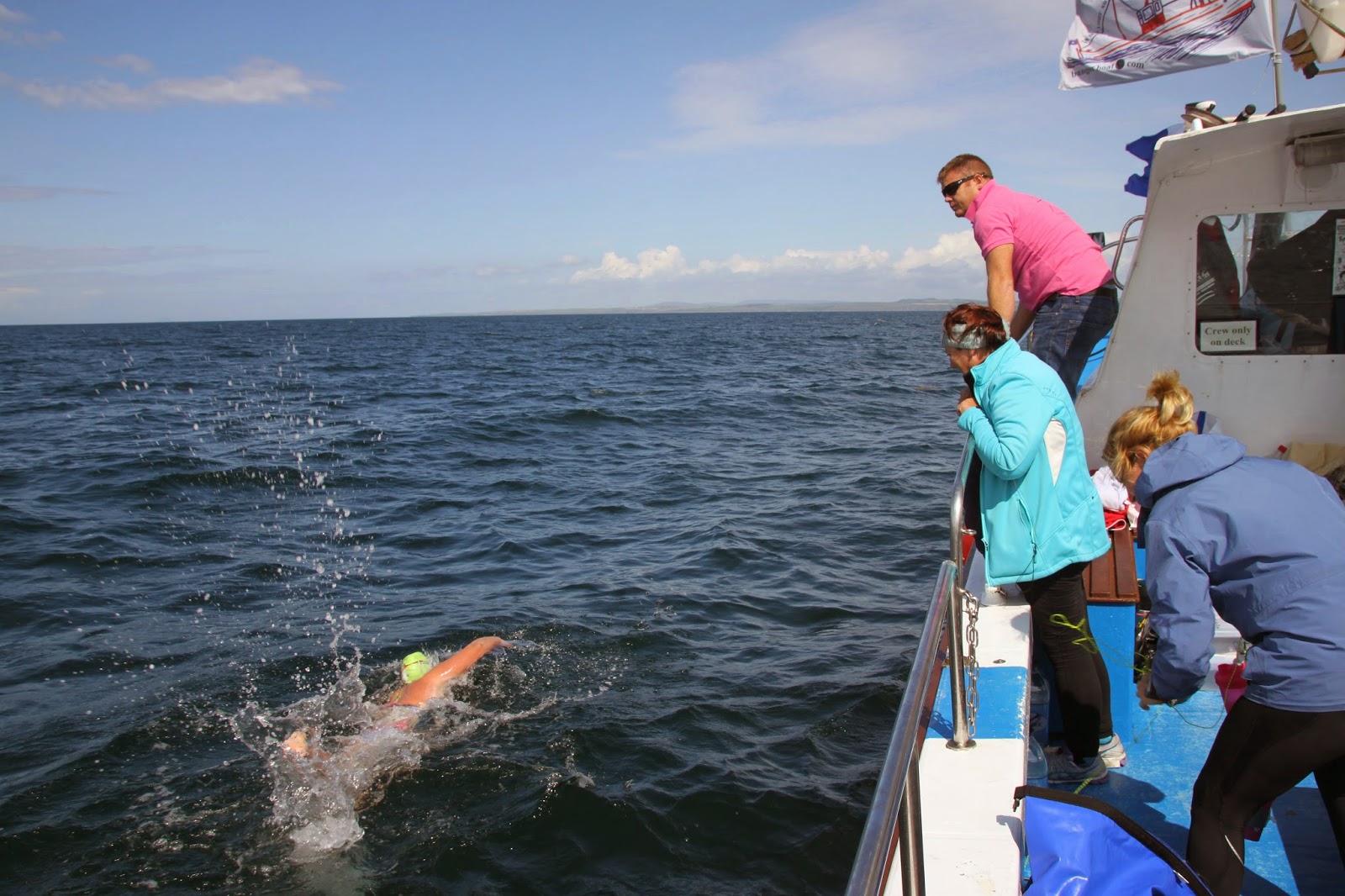 The longest I had swum before the day was 8 hours in Brighton le Sands with VLAD swim squad in Melbourne, so anything after that who knew what my body would do!? I was aiming for 10hrs-13hrs (max, please god!) so I didn’t want to go out too crazy but tried to keep it nice and steady.
So I was ticking along, with good feeds between 30 sec to 1 minute, with very positive BUZZ words coming from my crew on a small white board. We were really moving and making nice progress and BOOOOOOOOOOOOOOOOOM ..3.5-4 hours into the swim the sh*t hit the fan! It began to get rough and believe it or not, kept getting gradually worse as we progressed. Mentally draining YES, but this wasn’t going to phase me - mother nature was my friend and many different scenarios were going through my head, like playing a computer game (super Mario Brothers specifically) - every time I achieved the next level i.e. my next feed, the level would get harder and harder. Believe me, i had used a couple of lives by the end of the journey too!


It got to a stage when I said “bring it on..!” and found a nice place in my head and felt the body was on autopilot - I was picking herbs and watering flowers; I even put a wash on and hung a wash out to dry, and had a cup of tea with Alex and mummy! That might all sound completely psychotic, but that’s the best way I can explain it! The inspirational words, names of close friends and family members - were being put up on the whiteboard to help keep me going, and then I could see Scotland (between 5m swell and massive DELICIOUS glops of salty water *vom, as the bow of the boat and large waves coming from the right hand side kept generously pounding me). 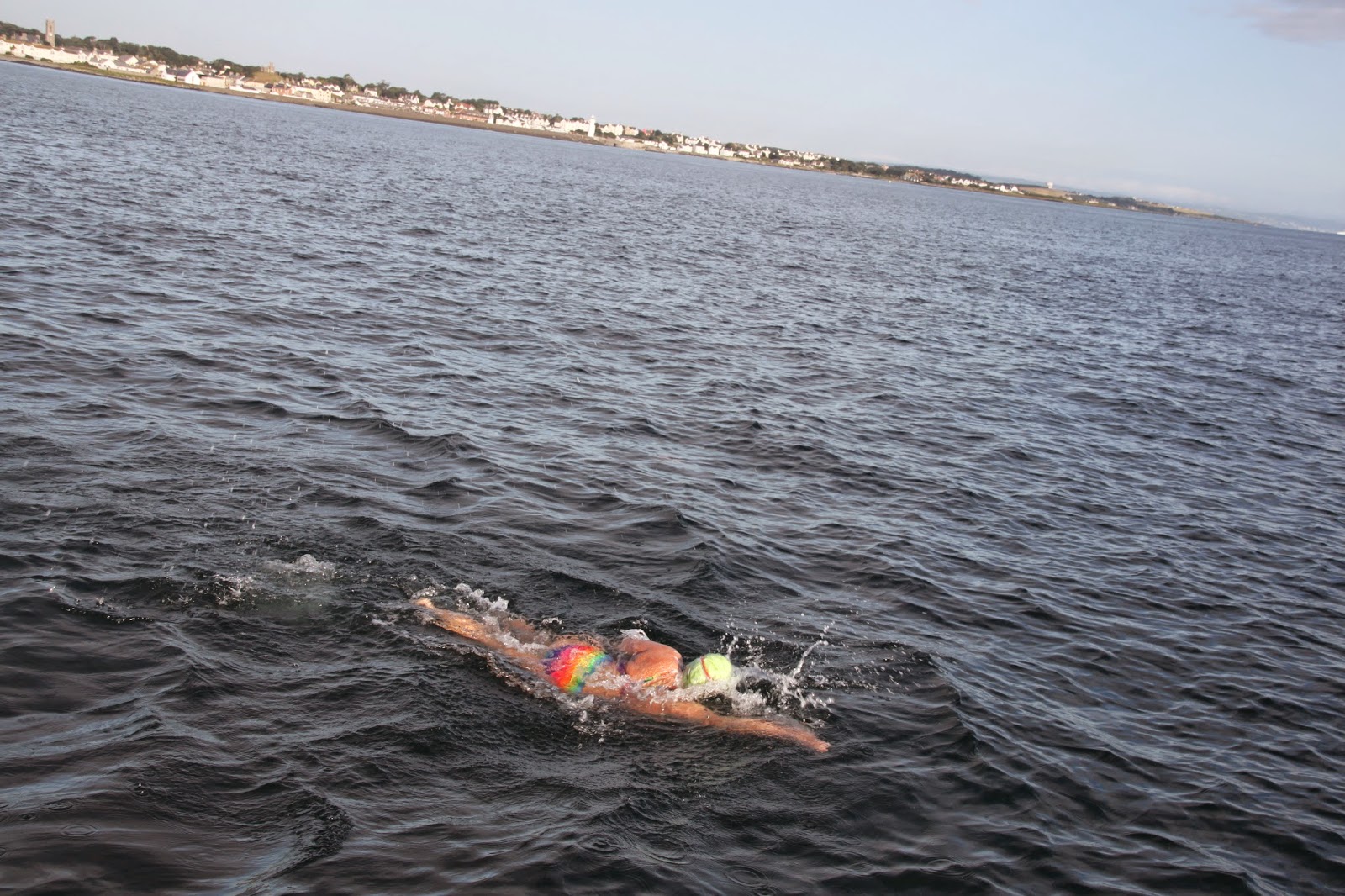 The conditions deteriorated to a nasty 5m swell with gale force winds causing us to swim a 40km route, rather than most direct route of 35km, in a time of 9hours 56mins 27sec, stroke for stroke the last km was EVERLASTING. Eventually a note went up on the whiteboard that the overall course record was GONE and I was to relax and enjoy the end of my swim. So THAT WAS IT - I didn’t go in with the intention to break the record of 9hours 35mins, but had explained to my crew that if I was near it come the last couple of hours, please let me know and try and push me if I had anything left to give. The encouragement was wonderful but I left everything I had in the water and mother nature got the better of me - being 1km offshore with tides, waves and winds being reluctant to let me “land on the moon” (otherwise known as Scotland) was tough. But hey, that’s why this ocean is said to be the SWEETEST one to conquer - the unpredictable elements and how mother nature makes you feel so insignificant.


So I plugged along and eventually one foot found sand – I gave a great yelp as if I was starring in the final scene of brave heart AHHHHHHHHHHHHHHHHHHHHHHHHHHH!!!!! - while having my arms up facing god and saying THANK YOU!
﻿
﻿
Brian and Padraig where on the dinghy waiting to take me back to the main boat, but I wanted to find a few wee stones for my crew to thank them first. I could only find wee shells, but down the back of the cosy they went and I went back into the water to get my lift home. Padraig pulled me up into the boat, tears where shared, and I proclaimed loudly “Well THAT was HARD!” And I do admit it was the hardest challenge i’ve done to date, and I feel proud and privileged that this infamous body of water allowed me to cross it – I hope I have earned a bit of respect from it, because it sure has earned it from me!

What next?? Who knows... but for now, my beautiful talented partner and myself are taking on Europe with our shoestrings and i’m sure there will be a few stories evolving from that!
THANK YOU to everyone who sent messages of support on social media etc etc – it was really overwhelming and it meant the world to me.


Summing it Up - All in all - Dreams do come true when you give it your all – thank you everyone who helped, supported, inspired, listened, loved and believed in me on my journey to conquer the Channel - you are every bit a part of my success and I will be forever grateful.
- Colleen